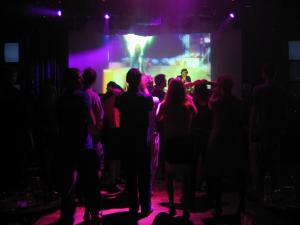 The Media Facades Festival Europe 2010 is co-organised by m-cult and curated by Minna Tarkka. m-cult and Minna Tarkka contribute artists’ projects to the Joint Broadcasting Events and are responsible for the implementation of the programme in Helsinki.

M-CULT HELSINKI
m-cult was established in 2000 to support production, research and development of
new media culture through active involvement in the practices, policies and structures of the field. Aiming at a sustainable development of media culture, m-cult works to create productive and critical encounters between actors in culture, technology and society. m-cult focuses on social and innovations of digital media by documenting practices and disseminating information; by training and consultancy and by organising events to bridge media art, research and development.

A PLATFORM FOR URBAN AND COMMUNITY MEDIA
Since 2005 m-cult has focused on establishing a platform for urban and community
media in Helsinki. This work has involved building collaborative networks, production and distribution practices with the urban channel M2HZ as key platform. To develop new competences and open infrastructures, m-cult also participates in the international FLOSS Manuals network. Events co-organised by m-cult range from interdisciplinary workshops to major international conferences and festivals like ISEA2004. A special interest is in experimental events that involve movement, geographical distribution, networking and live capture and thus probe the new contexts and forms that digital media brings to events.

Artist and Projects curated by m-cult Helsinki:
Giants of the Hoods – At Hand – Air Hunger – Action Flocking – We are the people, this is the place – The Park
www.m-cult.org

Minna Tarkka is media researcher, producer and director of m-cult, centre for new media culture in Helsinki.
She has been involved in developing the field of media art and culture since late 80's, as founding member of the artist organisations Muu and AV-arkki and as professor of interactive and multimedia communication at the Media Lab, University of Art and Design Helsinki. As event organiser she has brought two international symposia on electronic art to Helsinki, as programme director of ISEA'94 and as m-cult director during the ISEA2004 production. Her interests as curator and reseacher relate to participatory media, media art and media democracy, on which topics she also conducts doctoral research.