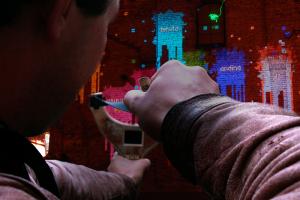 VR/Urban is a collective of public media interventionists founded in 2008. Since than they work together in the fields of interaction design and media art. The work of VR/Urban has been exhibited in Boston, Riga and several times in Berlin. The aim of all projects is to reclaim urban screens for the public. In tradition of situative art and graffiti culture, VR/Urban augments existing city structures with interventive and interactive media-art. The core persons behind the VR/Urban group are the media computerscien-/artist Patrick Tobias Fischer and the designer and design researcher Christian Zöllner. The team members are fluid elements of partners and friends in the fields of art, music, design, science and architecture.